The following poem centres around the idea of body image. It also focusses on an individual’s personal definition of beauty. It explores the struggles young women often go through–though this is an issue that affects both males and females–when it comes to trying to attain the beauty standards that have been laid out before them. Whether these standards come from the influence of peers, the media, or one’s own perception of self, pain often accompanies the desire to be beautiful. That’s what this piece is about.

I’ve been wanting to write a piece about beauty and body image for a long time, but I’d been struggling to find the right words. It wasn’t until a few days ago, actually, as I was skimming through one of my journals, that I found a source of inspiration. It was a one-liner that read, “Sixth grade: the year I learned to hate myself.” I’d written this a couple of months ago in my creative writing class when we were told to write from the perspective of our past selves. This line was written in response to this prompt and was inspired by my junior high, sixth-grade self–a version of me that really struggled with her body image. Thus, a poem was born. I hope you enjoy reading it as much as I enjoyed writing it.

-The Girl with the Purple Soul

When I was eleven,

the Popular Girls in my class told me

that if I wanted to get a boy to like me,

I had to be pretty.

So I traded my sweatpants in

for a pair of  jeans and a mini skirt,

wore my hair down

instead of up in a ponytail,

brushed my lids with

all in an attempt to be Beautiful.

I was in the Sixth Grade then.

I should have been playing with dolls

Because that’s what little girls

are supposed to do.

to play with flat irons

for the latest Beauty Hacks

when they’re in the Sixth Grade.

Because that was the year I started caring about appearances.

That was the year I learned to hate myself. 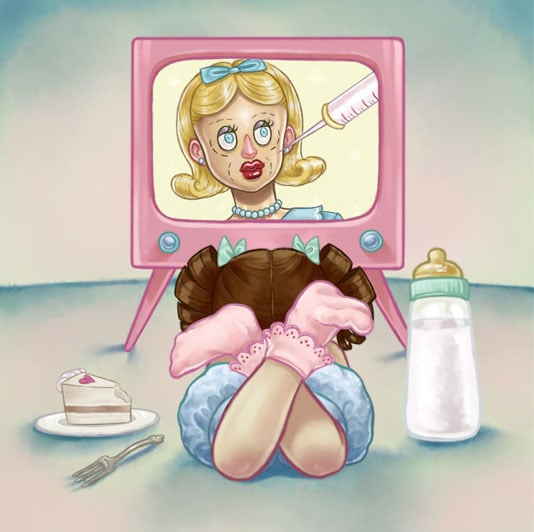 I spend an hour and a half on my makeup

a tedious routine of

to cover up the acne on my forehead

and the dark circles under my eyes.

But no–we’re not done yet because there’s still

to this blank complexion.

And once I’ve put my face on,

But then I get to school

and they’ve ruined it because

“You have lipstick on your teeth.”

“Your mascara is clumpy.”

But the next day I try harder.

So hard that I

burn my hand on the curling wand

when I go to do my hair.

So hard that I

subject myself to the torture of wearing

high-heels that nip at my ankles

and blister my heels.

But I remind myself that

and below average isn’t Beauty.

And I guess it’s true what they say,

that Beauty is Pain.

But there seems to be a

little bit too much ouch!

and not enough pretty

I am not Beautiful.

I do not know what I am.

All I know is that I

can’t bear looking at myself.

Not in mirror, and I

avoid cameras at all costs–

But only when you’re

Because the other girls look just fine,

With their plump lips,

too big for my face.

liked anything about myself.

My parents tell me I’m delusional,

and my friends think I’m ridiculous

Stop putting yourself down.”

But I can’t help but think

that they are all lying to me

because sometimes you have to lie

to spare someone the heartache.

Because they wouldn’t be very good people

if they admitted it, if they said,

I am not Beautiful.

These are the thoughts

that tear me apart,

pounding my self-esteem into

But did it ever exist in the first place?

I try to remember

when this all started.

I  count in my head.

still trying to be Beautiful.

I’ve given my tears,

the mascara run down my cheeks.

I hate feeling so… 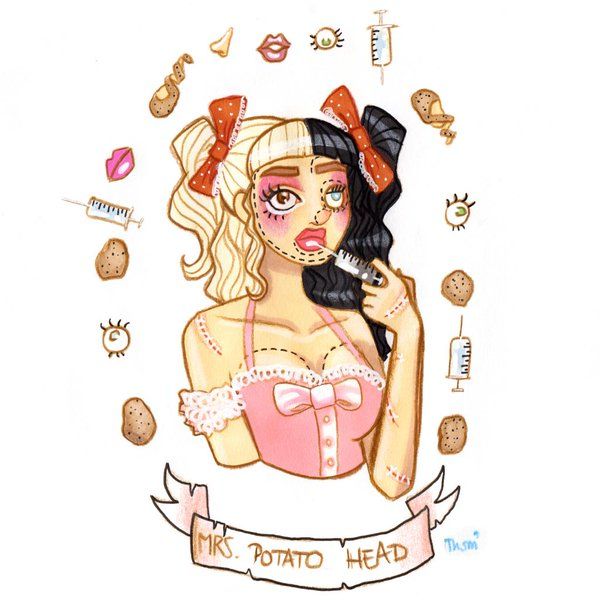 When I was eleven,

I was determined to be Beautiful.

Because that was the only way

But looking back now,

maybe it was about more than

Because to be Beautiful was

I wanted to matter.

So I decided that I needed

And that’s what I did.

That’s why I played

with flat irons instead of dolls,

why I read Teen Vogue

instead of jumping rope.

Because I thought these things

would help make me Beautiful.

But they say that Beauty always

comes with a price, doesn’t it?

My price was my childhood.

Because I never gave myself the

chance to be a little girl,

never gave myself the chance

to be a sixth-grader.

Because that was the year I started caring about appearances.

That was the year I learned to hate myself.

A haunting exploration of body image, this is the song I often listened to while working on this piece.  All the images incorporated into this post are also related to the singer herself–Melanie Martinez.

This piece is dedicated to all the nervous, sleepless nights I have endured. We’ve all been there. Sleep is an escape from all of life’s anxieties.  So tell, me what is one to do when they are unable to sleep? Thank God someone invented sleeping pills, huh?

sing me to sleep,

or else I won’t rest.

this mind’s been too

these thoughts are too

These lids are heavy,

but they refuse to shut,

and every time I begin to fall,

I am jolted awake by the sound

of my heart palpitating

I accept that fact that

I will be up before

my alarm clock goes off

It’s been 32 hours since I last slept.

Swollen eyes stare up at the ceiling,

I think I’ll call in sick

I tiptoe to the kitchen,

the good stuff on the top shelf.

I pop the lid,

lay you in my palm.

And I can hear